Ubud Dedari Villas are located on the path of the “Ancient Trek” described by Richard Mann in his book “Bali’s First People : The Untold Story”. You can find us right next to Dedari Temple.

Goa Gajah is well known to tens of thousands of tourist intrigued by the 1000-years-old cave and fascinated by the Hindu and Buddhist history of the complex, but only a few take time to explore beyond the cave and its associated purifying Holy Springs to stroll down close to the Petanu River which glides by not too far below.

Now the local Gianyar Government has made it easy by building steps and a walkway which lead to a gentle but exciting Ancient Trek adventure along the steep, wooded, banks of the river where giant trees and roots fascinate as much as the history.

The path is dotted with ancient shrines and soon arrives at the quiet village of Bedulu, seat of Bali’s last pre-Majapahit king and where there is still a small palace and an important temple.

A prehistoric sarcophagus has even been found in this venerable place. You can see it at the home of a villager.

At the nearby 14th century rock sculpture at Yeh Pulu the death of Bali’s last pre-Majapahit king is commemorated with a statue.

From holy cave, to river-bank shrines, through ancient Bedulu to Yeh Pulu the Ancient Trek winds its way through wet rice fields peppered with historic temples and shrines filled with ancient Hindu and Buddhist sanctuary, some among the oldest in Bali. There are two trekking routes : the first and the shorter one ending at Durga Kutri Temple and the longer one ending at Blahbatuh Palace. 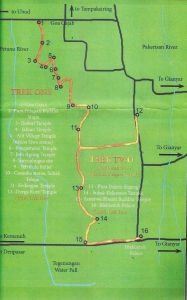 "Tropical dream in the jungle"

Located outside the busy streets of Ubud surrounded with jungle and the elephant cave temple down the cliff the view could not be more beautiful. Pool is perfect, great size and very clean...

Our deluxe villa had a wonderful aspect of the rainforest and ravine, looking down to the temple below from our substantial balcony.The room was wonderfully well appointed with a huge bathroom... Best of all was the staff who were genuinely warm and friendly and nothing was ever a problem for them. Six star service!

This is a great little place offering a very good standard of accommodation in a peaceful and very beautiful setting overlooking a rainforest gorge.

"The surroundings is beautiful"

The surroundings is beautiful, the hotel placed in a forest. There is silence and peace, you can enjoy the nature or relax on the side of the clean swimming pool. The staff was very friendly and polite. The food is also good. We ate many times at our terrace, even breakfast and dinner.

A ten minute ride from Ubud town centre, Ubud Dedari Villas is located on the edge of the jungled Petanu River valley in Banjar Lebah in the traditional village of Bedulu.

Perfect for a relaxing stay in a rich natural environment, the villa surrounds offer a taste of authentic Balinese life and are within walking distance of the famous Elephant Cave and Yeh Puluh Reliefs.

We offer transfer/pickup services between the villas and key locations. Simply call or email to make arrangements.